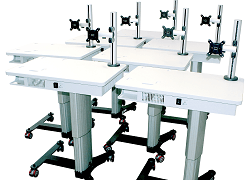 Ergo-Tec GmbH, headquartered in Bavaria, has been specializing in the development and production of high-quality medical products for 20 years.
We are your contact for customized products: We assemble medical devices according to customer requirements and supply everything from one source – from design and prototype construction to the serial production. Our employees develop, then manufacture complete medical devices and individual components of treatment systems that are specially designed to meet your needs. Our experience with medical devices enables us to transform product ideas into innovative developments.
Read more...

Since its establishment by Fritz Dürsch in 2000, the company has been designing and manufacturing medical products, special machines and ergonomic assembly workstations specifically according to customer requirements. Ergo-Tec employees contribute their many years of experience in the creation of drawings, 3D representations, 3D printed models and prototype construction. With their quality "Made in Germany" Ergo-Tec products are now represented on the worldwide market.
Since its establishment, the company has grown continuously and now has 30 employees. Since 2006 the company is certified according to the medical technology standard and to this day its certification ensures a high standard in design and production as well as the consistently high quality of its products. Ergo-Tec's employees in the development, design and production departments draw on 20 years of know-how and at the same time incorporate the latest developments in their work. In addition, Ergo-Tec has regularly participated in research projects with partners from science and industry since 2013.
Read more...

We offer our customers innovative know-how in the design and manufacture of medical products and devices.

We take responsibility for our region and regularly support social projects.

We implement the requirements of our customers in the best possible quality and with innovative technology.